Should An Employer Be Allowed To Check Your Credit? Maybe you didn’t know this but your employer or a prospective employer can pull your credit report. Many companies routinely do this as part of their hiring process. The think tank Demos released a report recently that 10% of unemployed Americans have been refused jobs because of information on their credit reports. Demos is a very liberal organization so its information may be a bit biased. But as the old saying goes, where there’s smoke there’s fire. Some people have probably being refused jobs because of their credit reports but 10% may be on the high side.

A bill to prevent this

Sen. Elizabeth Warren recently introduced a bill that would prevent employers from denying jobs to people based on their credit. If this bill were enacted, employers would no longer be able to require prospective employees to go through a credit check. They would also be barred from rejecting them due to any negative information in a credit report.

Why do people have bad credit?

There is no question but that bad credit can be caused by many factors. Demos thinks that the most common reason is the loss of a job and subsequently health insurance – which makes it hard for people to keep up with their bills. Others believe the number one problem is that many people are just irresponsible in the way they use credit cards.

Sen. Warren believes that credit checks are keeping many people out of the labor market who need jobs. Plus, she feels that there is no proof that a person’s credit correlates with job performance and that these checks are unfairly impacting certain groups of people including minorities, women, students and seniors. In addition, Warren also believes that, “This is another way the game is rigged against hard-working middle-class families.”

It’s arguable as to whether or not there is a correlation between bad credit and job performance but there is no question that credit reports can contain errors that might prevent people from getting jobs. One recent study done by the Federal Trade Commission found that 20% of credit reports had errors and 2.2% were errors so serious they could be causing people to pay more for their auto insurance, auto loans and mortgages. While 2.2% may not seem like a lot, think of it this way. There are credit files on roughly 200 million Americans. If 2.2% of these contain errors, that’s about 4 million Americans whose credit reports include serious errors.

The biggest myths of credit checks

There are a number of myths that have the do with employers and credit checks. For one thing, employers who do these checks rarely pull the reports of all applicants. They get them for a specific reason such as the job is in finance or at an executive level where the person would have profit and loss responsibility.

A second myth is that employers and lenders look at credit reports the same way. The fact here is that lenders put a heavy emphasis on credit reports while employers don’t emphasize them as much. Evaluating a prospective employee is a more holistic thing where skills, job experience and job history are more important. However, your credit report could be a showstopper if it causes your prospective employer to doubt your ability to handle and manage corporate assets such as debt and collections or litigation.

It’s also a myth that you’ll never be hired if you have poor credit. There are several reasons for this. First, many employers don’t know how to read a credit report or even how to apply the information they see. And second, most employers know that many successful people have had financial problems. And it’s likely that one blemish won’t disqualify you. This is because most employers don’t expect you to be 100% perfect.

Myth number four is that all negative information is bad information. The truth here is that some is more disturbing than others. A potential lender might balk if you had skipped a card payment but employers are likely to ignore it unless you were also sued for a debt that resulted in a monetary judgment.

What to do about negative information

If you know that there is derogatory information in your credit report such as late payments, a judgment, accounts that went to collection or a default, it’s best to get the issues out in the open and discuss them with your potential employer. This gives you the opportunity to explain what happened. The company is going to learn about it anyway and it’s better if it finds out from you. If you don’t bring up those negative items and discuss them, your prospective employer may wonder why and if there might be other information you’re trying to hide. 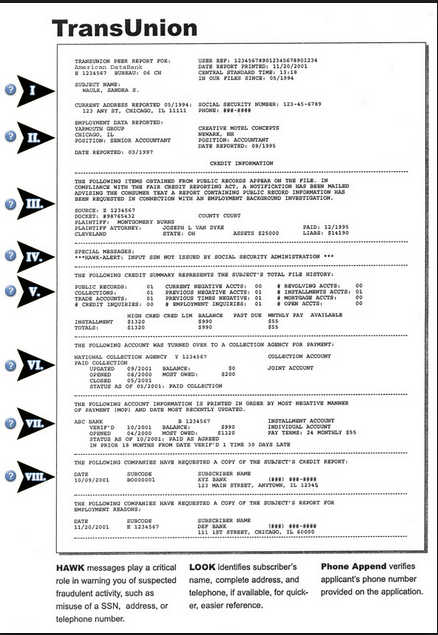 Get your credit report first

You should get your credit reports on a regular basis anyway. But it’s most important to get them when you’re job hunting or applying for a mortgage, an auto loan or some other major item. There are three credit-reporting agencies and each has a file on you. To make matters worse, the information in these three files can be different. There’s no law that a lender must provide information to all three credit bureaus or even to just one. You really need to get all three of your reports. You can get them free once a year from the three credit reporting bureaus – Experian, Equifax and TransUnion – or at the site www.annualcreditreport.com.

What to look for

When you get your reports you need to look for the following items.

If you find one of these in a credit report, you can bet it’s having a negative effect on your credit score and could be a problem with a prospective employer.

If you do find an error

Of course, there’s always the possibility that the item is there due to an error. The credit bureaus handle thousands of items a week and mistakes can be made. As you read in a previous paragraph, errors have been found in 20% of all credit reports. If you find one, you need to dispute it by writing a letter to the appropriate credit bureau along with whatever documentation you have that proves your case. Once the bureau receives your letter it is required to contact the company or organization that supplied the information and ask it to verify the item. If the organization cannot verify it or doesn’t respond within 30 days, the credit bureau is required by law to remove the item from your credit file. As you might guess, this could result in a nice boost to your credit score.

It’s easier but still not easy

There has been pressure on the credit reporting bureaus to make their reports easier to understand. And they have gotten better. But they’re still not as reader-friendly as, say, Sports Illustrated or Cosmopolitan. If you find you have a problem understanding your reports, you might ask a friend or relative for help. You could go to one of the credit counseling agencies mentioned previously and have a counselor explain things to you or you could watch this video to learn more about understanding credit reports.